East Linton is a village and former police burgh in East Lothian, Scotland, situated on the River Tyne and A199 road (former A1 road) five miles east of Haddington
Originally called "Linton", the village probably gets its name from the Linn (a waterfall) on the river which it grew alongside. It was later renamed "East Linton" to distinguish it from West Linton in Peebleshire when the railways were built.
Significant to the development of the village was the East Linton Bridge crossing the River Tyne, carrying the Edinburgh to Berwick-upon-Tweed post road (Great North Road).
In September 1549 French troops destroyed the bridge to delay the retreat of the English army. The current bridge was built no later than 1560 at the same location.
Today, only one church remains active, Prestonkirk Parish Church which is also an old name of the parish. The village is now, along with Stenton and Whittingehame; part of the parish of Traprain. The original church was founded by Baldred of Tyninghame, also known as 'St Baldred of the Bass', in the sixth century. The current church tower dates from 1631, while the main building is from 1770. It was enlarged in 1824 and the interior was redesigned in 1892. The St Baldred window was established in 1959. 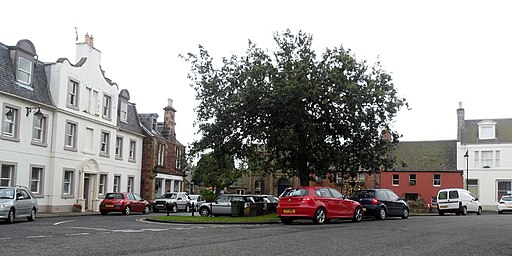