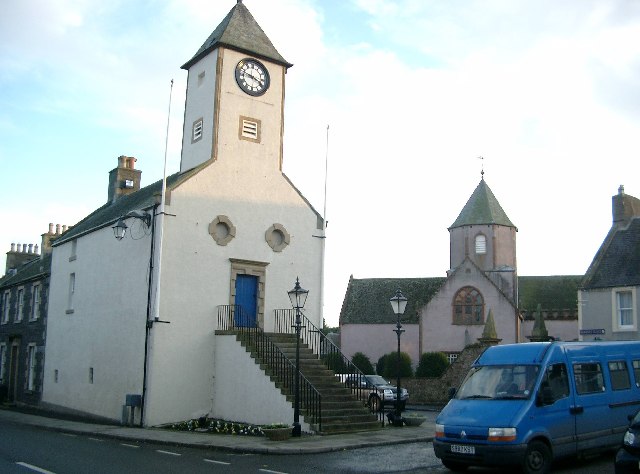 The former Royal Burgh of Lauder (/ˈlɔːdər/, Scottish Gaelic: Labhdar[3]) is a town in the Scottish Borders in the historic county of Berwickshire. On the Southern Upland Way, the burgh lies 27 miles (43 km) southeast of Edinburgh, on the western edge of the Lammermuir Hills.
Below the town, on Castle Hill, stood the Crown Fort, a scene of many skirmishes over the years. It is shown on Timothy Pont's map. Early records give de Morville a castle at Lauder, but it would appear that there was a new erection of it by the English in the reign of King Edward I. James III and James IV both used the castle. In 1548 the fort was occupied and strengthened by Somerset, the Protector, and garrisoned by Sir Hugh Willoughby 'in the end of winter and beginning of spring'. After a minor siege with French cannon, it was evacuated on 22 March 1550. The following year John Haitlie in Fawns and William Haitlie in Redpath (near Earlston) were arrested for "treasonably supplying the English in the Castle of Lauder, thereby enabling them to hold out longer." The Crown which had in any case abandoned the fort during its occupation, had given it to Robert Lauder of that Ilk (d. bef July 1567), who provided it, in 1532, to his daughter Alison as dowry when she married. Following she and her husband's deaths in feuds in 1547 it reverted to Robert Lauder whose wife was Alison Cranstoun. A Cranstoun relation later sold it on to Chancellor John Maitland in 1587. He commenced the building of the magnificent Thirlestane Castle upon that site two years later, parts of the original walls of the ancient fort being included in the walls of the new edifice. In 1670-7 Sir William Bruce, known as a 'gentleman architect', supervised its transformation into a palace through remodelling for the Duke of Lauderdale.

Skip hire in Lauder?
Dunbar Skip hire covers and services Lauder and the surrounding areas in North​ Northumberland and the Scottish Borders offering a same day service, 7 days a week