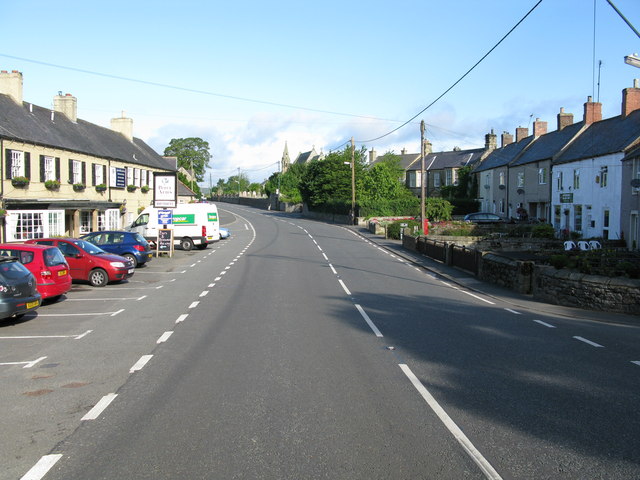 Otterburn is a small village in Northumberland, England, 31 miles (50 km) northwest of Newcastle upon Tyne on the banks of the River Rede, near the confluence of the Otter Burn, from which the village derives its name. It lies within the Cheviot Hills about 16 miles (26 km) from the Scottish border. The parish of Otterburn is at the heart of Redesdale, a Northumbrian upland valley.
The name simply means otter stream, a stream frequented by otters (Old English otor + brunna). Otterburn was the site of a major battle in 1388 between English and Scottish armies. The engagement, in which the Scots took Sir Henry Percy captive, is the subject of the English Ballad of Chevy Chase and the Scots ballad Otterburn.
Today, the village is close to the Otterburn Training Area, one of the UK's largest army training ranges at approximately 60,000 acres (240 km2). The village also has an independent general grocery shop, two hotels and Otterburn Mill, an 18th-century woollen mill containing a small museum, outdoor shop and cafe.

Skip hire in Otterburn?
Hawick Skip hire covers and services Otterburn and the surrounding areas in North​ Northumberland and the Scottish Borders offering a same day service, 7 days a week