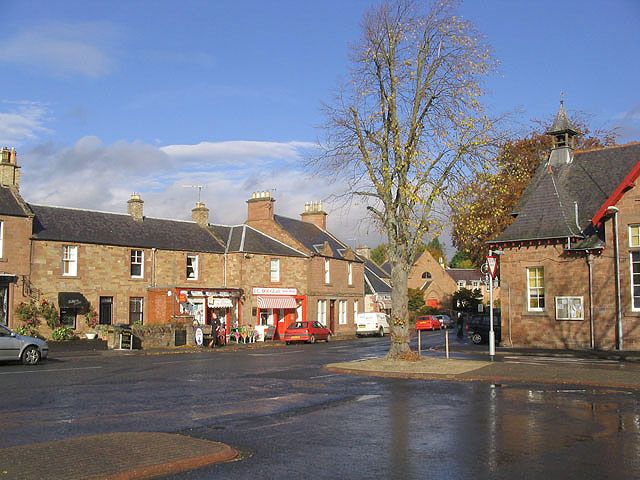 St Boswells (Scots: Bosels / Bosells;[3][4] Scottish Gaelic: Cille Bhoisil[5] [ˈçiʎəˈvɔʃɪl]) is a large village on the south side of the River Tweed in the Scottish Borders, about 1 mile (2 kilometres) southeast of Newtown St Boswells on the A68 road. It lies within the boundaries of the historic county of Roxburghshire.
It has a hotel, post office, award-winning butcher, garage, fish and chip shop, bookshop and café and several convenience stores. There is also a golf course next to the River Tweed, a cricket club, football club, rugby club and tennis club.
The village is mostly known for being on the route of St Cuthbert's Way, a long distance footpath linking Melrose Abbey (5 miles or 8 kilometres northwest) to the Holy Island of Lindisfarne off the Northumberland coast in north east England. The name commemorates Saint Boisil, an Abbot of Melrose.
The village has an annual gypsy fair, originally a focus for the trade of horses. This fair once attracted Gypsies from most parts of Scotland, northern England and Ireland. However, today it is little more than a two-day get-together on the village green. Fair day is on 18 July each year. It remains a popular opportunity for many locals to have their fortunes predicted.