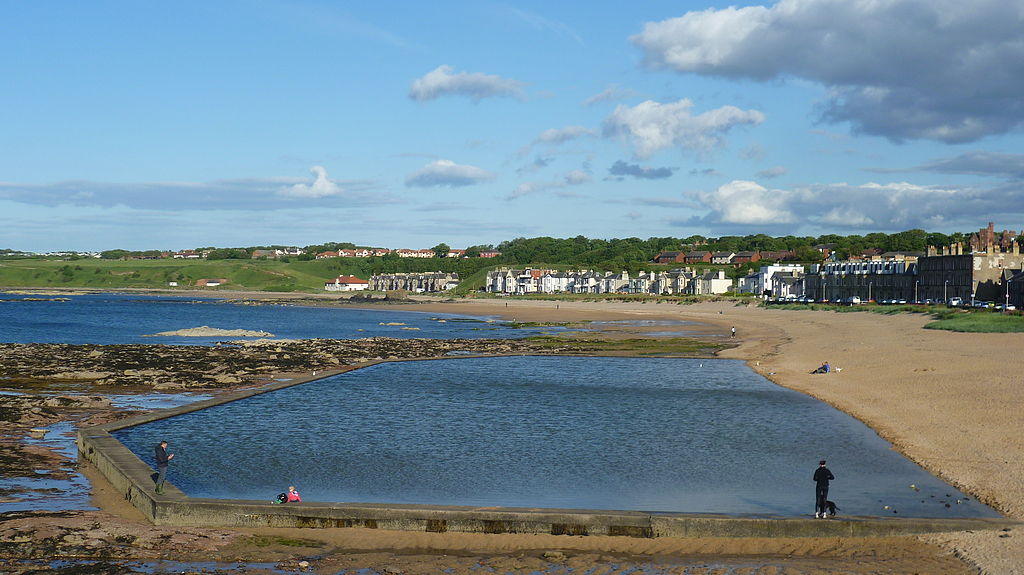 North Berwick (/ˈbɛrɪk/; Scottish Gaelic: Bearaig a Tuath)[2] is a seaside town and former royal burgh in East Lothian, Scotland. It is situated on the south shore of the Firth of Forth, approximately 20 miles (32 km) east-northeast of Edinburgh. North Berwick became a fashionable holiday resort in the nineteenth century because of its two sandy bays, the East (or Milsey) Bay and the West Bay, and continues to attract holidaymakers. Golf courses at the ends of each bay are open to visitors.
The name Berwick means "barley farmstead" (bere in Old English means "barley" and wic means "farmstead"). Alternatively, like other place names in Scotland ending in 'wick', this word means 'bay' (Old Norse: vík). The word North was applied to distinguish this Berwick from Berwick-upon-Tweed, which throughout the Middle Ages the Scots called South Berwick. It was recorded as Northberwyk in 1250
The "Auld Kirk Green" at the harbour was allegedly used for gatherings by the accused in the North Berwick Witch Trials (1590–92). Legend has it that Satan himself attended a ritual there in 1590. During the sixteenth century at least 70 people were implicated in the Witch Trials, and the events inspired works such as Burns' "Tam o' Shanter" and "The Thirteenth Member" by Mollie Hunter.
One of the most famous witch trials at North Berwick was that of Agnes Sampson. She was accused of making a potion to create rough storms in the North Sea as King James VI was sailing home from Denmark with his new wife, Anne of Denmark. The trial took place in 1591, attended by King James. Agnes Sampson was tortured to confess, and then burnt at the stake, like many other innocent people.